Research in the Willis Group

Research in the Willis group is focused on developing new catalytic methods to meet the demands modern science places on synthetic chemistry. These can involve being able to produce specific molecules more quickly, in fewer chemical steps and with the production of less waste materials than ever before. The ability to prepare molecules never before synthesised, or to deliver many related structures with only minor adjustments to the synthetic method are also common goals. To achieve these aims we are involved in the development of new reactions, new asymmetric processes and new strategies for synthesis. Summaries of several areas of research within the group are provided below. The publication section provides further details:

Sulfur dioxide has a long and interesting history as a reagent in organic chemistry, but presumably due to safety concerns its use is almost absent from the recent chemical literature (and laboratories). A variety of sulfur dioxide derived functional groups, such as sulfonamides, sulfones and sulfonates are present in a large number of biologically significant molecules, which makes this even more surprising. In 2011 we reported the use of a solid, stable and easy to use sulfur dioxide surrogate – DABSO, which is now commercially available from a number of suppliers, such as Sigma-Aldrich, TCI, Apollo Scientific and Fluorochem.

We have exploited the combination of electrophilic DABSO with aryl/vinyl halides or boronic acids (metal catalysis), or organometallic reagents, allowing the direct synthesis of sulfinate intermediates in situ. These can then be utilised to form a variety of functional groups such as sulfones, sulfonamides and sulfonyl fluorides. 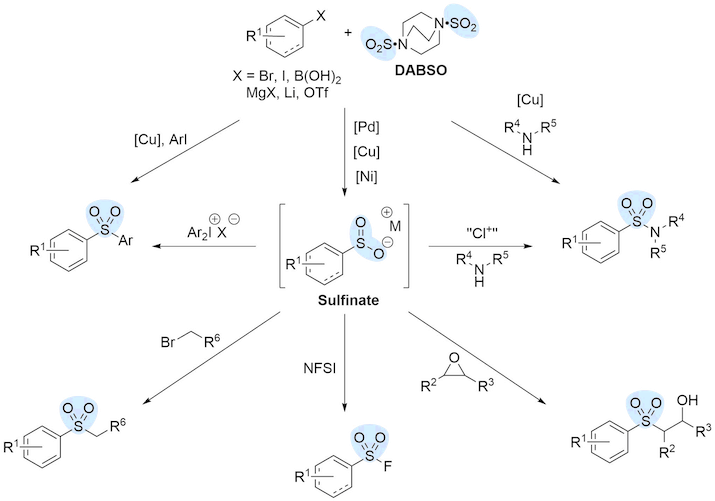 Boronic acids are some of the most versatile and widely used reagents available to synthetic chemists, particularly for cross-coupling reactions. However, heterocycle-derived boronic acids are notoriously unstable and have been highlighted by researchers at Pfizer as having very low success rates in Suzuki-Miyaura couplings. We are interested in exploring alternatives to heterocyclic boronic acids in coupling processes, and have established the use of heteroaromatic sulfinates as nucleophilic cross-coupling reagents. These have proven excellent cross-coupling partners in palladium catalysed coupling reactions with (hetero)aryl halides.

Despite their success as coupling partners, the ionic nature of sulfinates makes the preparation and purification of complex heterocylic sulfinates a challenge. We aimed to expand the use of sulfinates in such reactions in a variant that allowed for simpler purification of the reagents, multistep elaboration and greater diversity of the nucleophilic coupling partners. We showed that heterocyclic allyl sulfones can function as latent sulfinate reagents, undergoing deallylation to release the sulfinate functionality under the reaction conditions used for the cross-coupling. This strategy enabled the synthesis of pharmaceutical agents crizotinib and etoricoxib, demonstrating the utility of these new reagents.

Sulfur(VI) based moieties, in particular, sulfonamide and sulfone-containing compounds have been widely used in medicinal chemistry, for a variety of disease targets. In contrast, their mono- and di-aza analogues - sulfonimidamides, sulfoximines and sulfondiimines - are less prevalent; however, they recently have emerged as useful functionalities for both pharmaceutical and agricultural sectors.

The preparation of sulfonimidamides previously required multiple steps, which likely limited their use. The Willis group has developed an alternative strategy, which allows for their synthesis in a one-pot procedure. This process uses a moisture-stable sulfinylamine reagent, TrNSO, as a linchpin, in combination with widely available organometallic reagents and amines. TrNSO is highly effective even on multi-gram scale, and is now commercially available from Sigma-Aldrich and TCI.

Sulfondiimines are the di-aza analogues of sulfones and have potential value in medicinal chemistry owing to their attractive physicochemical properties, but there are limited ways for their synthesis. The Willis group has recently developed a modular sulfondiimine synthesis from the combination of two organometallic reagents and a sulfinylamine linker, followed by a novel S-imination.

The synthesis of sulfondiimines with orthogonal N-substituents facilitates the unveiling of an N-H group in the presence of a second protected N-atom. This allows for the preparation of a diverse range of N-derivatives.

We are interested in the development of synthetically useful intermolecular hydroacylation reactions; such processes are inherently atom economic, involving adding the elements of an aldehyde across an alkene or alkyne.

The vast majority of metal catalysed hydroacylation reactions employ a chelating group as this has proven to be an efficient strategy to diminish undesirable decarbonylation pathways. The Willis group has pioneered the use of sulfide and amine tethers, with pyridines and phenols also utilised for this purpose. These chelation-controlled processes have allowed significant advances, often benefiting from mild conditions and increase substrate scope for reactions. However, their principle limitation is that the chelating group is present in the products. The use of a chelating group that is a common, synthetically useful functional group is therefore of high importance. We have recently demonstrated for the first time the use of carbonyl groups, such as amides, esters and ketones as effective chelating groups, delivering exceptional scope and utility of products.

The publications section gives a good indication of the ongoing research interests of the group.